Continue from part 1, this part is all about Ulquiorra in his SEGUNDA ETAPA and his EPIC BATTLE with the heart. Also the UlquiHime confrontation <3 Comment on Ulquiorra's 2nd release and UlquiHime will take place in this post ^_^

This ep is totally an Ulquiorra ep because it's full of Ulqui being all victory and smexy. Even the Omake Preview and Arrancar Encyclopedia are also about him. So I also include it in the screencap because it's hilarious to see Ulquiorra acting OCC.

Meanwhile, Ishida and Orihime are on the way to the dome with Ishida’s elevator. I still feel strange with the way the anime handle the camera angle… from the bottom. But at least, I finally make out of the shape of that elevator. There’s a part where Orihime touches Ishida’s back too.

The reiatsu from above pours down again and this time. Both of them can't react but almost drops down. This time, Ulquiorra's black reiatsu in his 2nd release pours down from the hole above, cover the sky in black. That part is animated amazingly.

Both Ishida and Orihime are bewildened at this strange phenomenon. Ishida wonders what the hell is that and is it really reiatsu?

"It feels like there's an ocean above the sky." Metaphor :D

I think there's a reason that Kubo chose Ishida, of all people, who is a specialist at reading reiatsu, commented on Ulquiorra's reiastu because it was different from anything else. Of course, just like the fact that only Ulquiorra reached that 2nd release is also a mystery that Kubo hasn’t yet revealed in the manga.

In perfect Spanish >w< accompany by the new eerie soundtrack.

Drool on Ulquiorra’s legs and his awesome abs *w*

I only have one thing to complain. Where is the symbolic moon? >_<

Ichigo who is terrified but keeps himself together and takes his stance.

Have I told you that Ulquiorra's eyes in new color is hot? *v* Ulquiorra sees that Ichigo is shaking, yet doesn't show a sign of giving up in his eyes. Ulquiorra decides to make him understand even if he has to tear Ichigo into dust.

LOL this is like a scenery in Bleach PSP people. BATTLE START! Ichigo vs. Ulquiorra, Round 2 :D We only miss the HP and MP stats above them XD

Ulquiorra takes a stance and Ichigo is confused of what Ulquiorra's going to do.

Oh Goddamnit, it's hard to take the decent screencap because Ulquiorra bumps toward the screen at his fucking fast speed.

Now I think about it, Ulquiorra’s stance is just like a stance which the marathon athletes are going to dash and jump :D He lowers his body and pumps on his legs. It results the speed from the force that he kicks at the ground. It’s also like he is gathering momentum for a jump and flight XD

Just like the throwing lance attacks, this attack is repeated 3 times in 3 different angles. And it’s awesome.

Another tower is destroyed. The soundtrack in this fight is so awesome because it's rapidly upbeat like a soundtrack for a righteous fight, but Ulquiorra is a "villain" who is winning against Ichigo - the hero here. 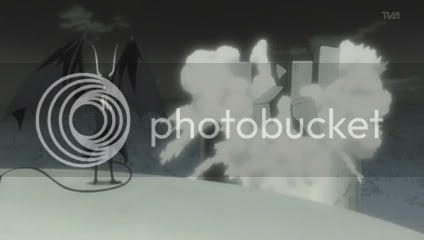 There’s nothing better than to see a close-up on Ulquiorra’s eyes.

Ulquiorra sees that Ichigo is still standing. So he take off flying toward him. Ichigo is alarmed.

He flies past him, so he stops his track and turns around and sonido.

Ichigo immediately moves his sword to defend, but Ulquiorra grabs it with his hand.

When I look at Ichigo being all terror when he sees Ulqui’s tail is going to fly at his face rapidly that he can’t dodge, I notice the pace of the fight in Ulquiorra. If in his 1st release, Ulquiorra takes him time to let Ichigo breath, but in this 2nd release, there's no chance.

There's no need to say, but I love how Ulquiorra's tail moves. It makes a swishing sound :>

Ulquiorra: You’re a fool, Kurosaki Ichigo.
Me: You just realize it now. There’s no cure for fools. You should have known this fact right?

Anyway, I think those who call other fools are also fools themselves. Because they don’t understand how the fools think. That could apply to Ulquiorra’s situation right now.

Now I’ve been thinking about it. This is the third time that Ulquiorra targets Ichigo mask. The first time, he broke a small part of it with his lance. The second time with Cero Oscuras. Because breaking the mask means stopping Ichigo using his Hollow power. It’s clear that Ulquiorra doesn’t want a decent fight one-on-one like Grimmjow. He just wants to strip down all of Ichigo’s powers so that he will be nothing but powerless in front of him.

Ulquiorra mentions about the heart. He holds out his hand.

Because we’ve already known where the heart is (from Kaien’s explanation). That’s why when the anime animated his hand motion when he talks about the heart, I think it’s a nice touch and foreshadowing. He holds his palm out and grasp in fist as if he is trying to convey something, trying to grasp something called “the heart”.

Though his mouth just spouts out some bleak comments about the heart that will cause death and despair.

Ichigo: I'm fighting because I have to win.
Ulquiorra: Nonsense.

Ishida and Orihime finally arrive on top of the dome. Without warning each other, they jumps. And LOL while Orihime lands so skillfully and perfectly (she lands with both feet totally, back-flips and rolls twice to keep the balance), they make Ishida fall because the boy stumbles the ground with one hand and fails on back-flipping XD But see how much gracefully his pose is when he’s about to land at the beginning. That’s why it’s hilarious XD And Orihime totally ignores him to run toward the tower XD Oh the LULZ.

While Ishida looks around to find Ichigo, Orihime is already running as if she had a clue of where Ulquiorra and Ichigo are.

And she finally found them… in astonishment and horror. The wind blows her hair from behind to upward… up to where Ulquiorra and Ichigo are.

The soundtrack changes into melancholy tone. It sounds eerie and sad at the same time. Very fitting for this situation.

Oh SQUEEZE @v@ for the UlquiHime confrontation :D first and foremost before Orihime finally notices Kurosaki-kun in his tail. I have to squint my eyes to spot where Orihime is from the place Ulquiorra stands. It’s fucking far. Yes, Ulquiorra can see her. Ulquiorra feels her coming. He expects her coming. Yes, Orihime also knows exactly where Ulquiorra is and she is able to see him from that kind of distance. Ulquiorra’s voice when he said that line has the softest tone that I have ever heard from him. I'm almost melt at his voice. No, this is not paranoid after all I have seen him yelling. This tone is different than his usual monotone.

Ulquiorra: Now where is his heart?
Orihime: *le grasp*

Orihime’s face of horror and despair is wonderfully animated together with her voice when she shouts out “DON’T”. It’s so sad and depressing.

The delay in time between Orihime’s yell and Ulquiorra’s cero is so eerie. It’s all silent before the despair comes. The ep ends at where the blast of cero dissolves and a hole is made. They totally censor that scene.

Orihime: What should I do? Kurosaki-kun was supposed to handle the preview, but…
Ulquiorra: Woman, I will fill in for him. I will replace him as the love of your life.
Orihime: Okay, please put on a shiny dress and afro like Yoruichi-san's in the ending theme and start dancing.
Ulquiorra: Huh?

They are totally dorky toward each other XD

It takes me a quite to realize that it was Ulquiorra who said “Arrancar Encyclopedia”,  not Gin. I already expect this scene would come when Ulquiorra finishes his two releases, but I’m kind of perplexed of how Gin would do it because Ulquiorra said that Aizen hadn’t seen his form. How in the world Gin knows? And here is the hilarious OCC!UlquiGin convo XD

OMG, Gin grabs his tail… He grabs HIS TAIL XD I dream for days to see someone else would grab one his tail for once in anime. Never think it would be Gin. And Ulquiorra makes an odd sound when his tail is grabbed. UNF UNF @w@ It decides that his weakness is his tail XD I have another inspiration for the next smut fanfic with his tail.

Gin opens his eyes to see and Ulquiorra covers them. LOL the OCC, but it’s nice to see him acting so desperate and cute XD Oh grasp, Gin is even creepier with his eyes open @__@ The anime finally changes his eyes color in blue exact as it was in the manga. (Before that, they were red)